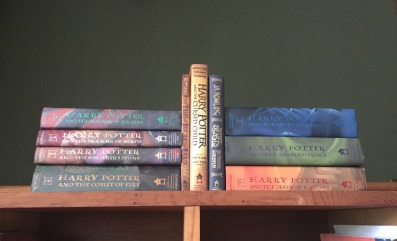 I feel like THE worst bibliophile and Harry Potter fan on the planet!
Apparently, yesterday was the 20th Anniversary (that makes me feel super old, by the way) of the release of the very first Harry Potter book, Harry Potter and the Sorcerer’s Stone

and I did not do a single post about it.

I can still remember the excitement of reading that very first book in the series; cracking it open and smelling the pages of a fresh book. I also remember the anticipation and dread when we had to wait for the next book in the series to arrive; it always felt like an eternity.
I was not always able to go to the midnight release of the next book, but I did go to a few of them. How about you? Did you attend any midnight release parties?

Those that have never read the books just cannot seem to understand the culture that has developed around Harry Potter.
Yes I am old. By society’s standards, I should not be so infatuated with a youth fiction book series. However, when I first began reading them, I was not, by any means, considered “old”. I grew up with Harry, Ron, Hermione and Hagrid. It led me to a whole unexplored genre of literature. And now, I have passed that world down to my oldest son. We have read every single Harry Potter book together, me reading aloud to him. After each book was completed, we watched the corresponding movie together. It has been a wonderful bonding time for us and it has given me some common ground to stay connected to my teenager.

Harry Potter has created memories for people, bonded families over shared literature, and helped children delve into reading when they otherwise would have had no interest. Harry Potter has provided an escape from real life for those whom need it, created a shared culture for those who may have never known such fabulous people existed, and opened up a love of reading for many that never saw reading as enjoyable.

Yes, there has been some controversy, but is that not what makes a book great?

I have read each book multiple times (too many than I will admit to) and each time I still feel that wonderful flutter that happens when you open a book for the first time; a book that you know is going to be incredible.

were never as good as the books; movies never are. There really is just not enough time to capture the true heart of the story or to develop the unmistakable essence of each character in a 2-3 hour movie. Overall, the movies were decent. My only complaint was that they completely changed some of the story-line. I can understand that there is not room to put everything into the movie, but I do not understand why it is necessary to change the original story.

For fun, here are some Harry Potter websites you can peruse to relive some of those favorite moments, 20 years later.

I would love to hear in the comments how Harry Potter has touched or changed YOUR life or the lives of your children.